Rich in wines whose worldwide reputation is well established, the "Bordeaux Wine Route in Saint-Émilion, Pomerol, Fronsac" takes up the right bank of the Dordogne, between Bordeaux and Bergerac, and the northern part of l'Entre-Deux-Mers.

The road takes its name from the organic group combining three AOC of the same name, organized around the city port of Libourne, and form today the Greater Libourne Region.

The jewel of the territory is the magnificient medieval town of Saint-Émilion, classified as World Heritage by UNESCO for its "Cultural Landscape". It's one of the most famous example of the Bordeaux vineyard.

The "Bordeaux Wine Route in Saint-Émilion, Pomerol, Fronsac" stands out thanks to its large homogeneity of landscapes, its geology (subsoil with mainly limestone), its concentration of vineyards, and the importance of family farms (small and medium properties), which contrast with the main domains of "Bordeaux Wine Route in the Médoc." 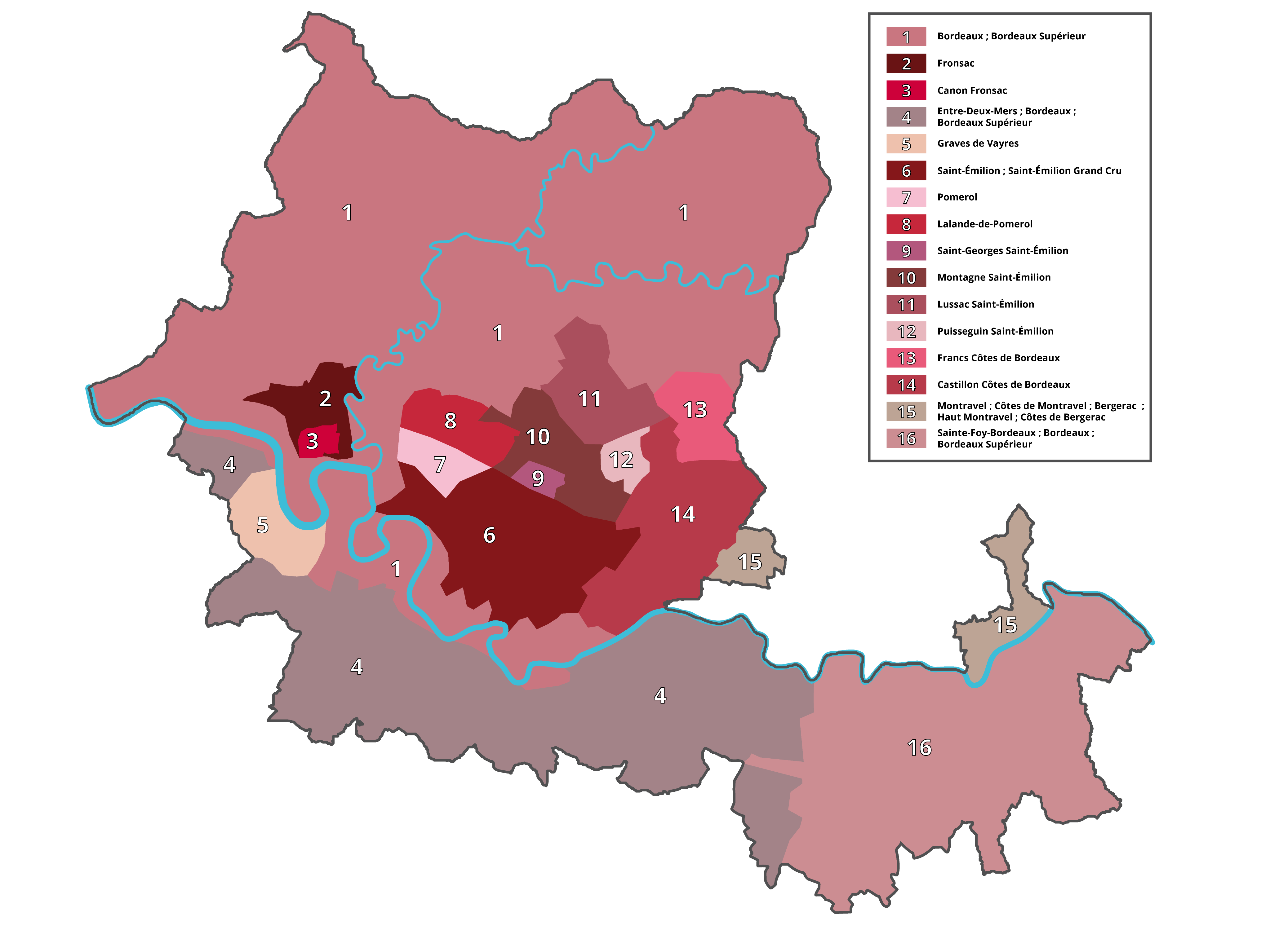 THE JURISDICTION OF SAINT-EMILION

In the heart of Grand Libournais, in a region constituted of soft wine hills and green copses, this magnificient medieval city settled on a limestone hill benefits from its location at the crossroads of Bordeaux, Saintonge and Perigord.

The city has an important architectural and religious heritage (hermitage, monolith church, collegiate church, palace of archbishops, opulent-looking buildings and vestiges of fortifications) which offers a variety of little streets and shady squares, but also takes advantage of the reputation of his wine-making heritage (vineyards of Saint Émilion) whose wines are among the most wanted in the world. 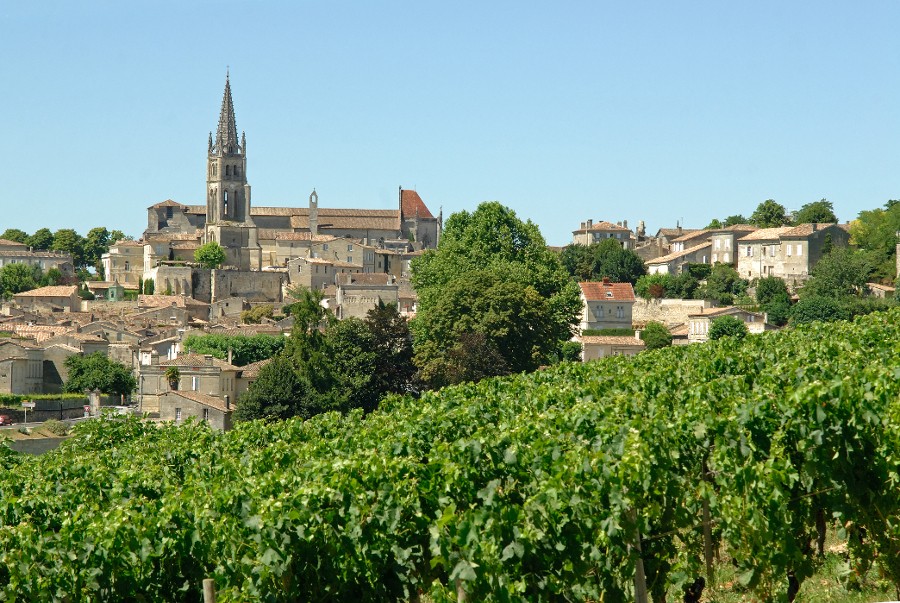 The medieval city and its "jurisdiction" is listed as a World Heritage Site by UNESCO since 1999 as a "Cultural Landscape". This constitutes "the remarkable example of an historic vineyard landscape that has survived undamaged" and "illustrates in an outstanding way the intensive culture of vine at wine into a region delimited with precision".

This old fortified port founded in the thirteenth century by Roger de Leyburn, in the centre of a rich wine-producing region and at the confluence of the Dordogne and Isle, was designed to be the natural outlet of wines and wood from the Dordogne valley - wines of Saint-Émilion, Pomerol, Bergerac, etc. - Exported to England.

For a long time the second northern city of Guyenne after Bordeaux, Libourne maintains with it ambivalent relationships : "goddaughter" of the Aquitaine capital during the short reign of the Black Prince, it is also her rival in trade or tax law. 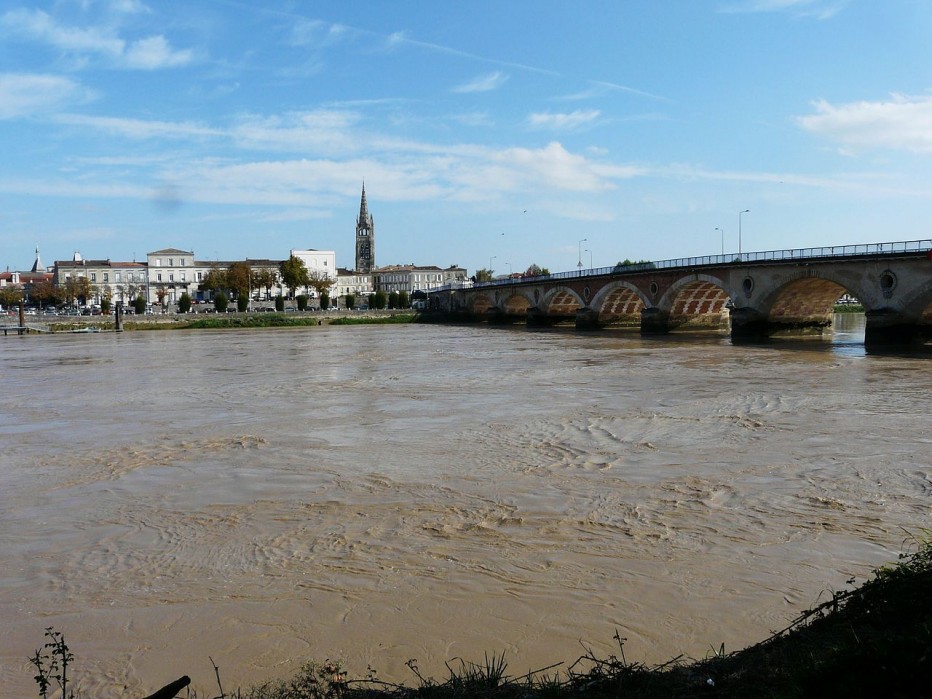 The kings of England gave to the city of Libourne, just as they had done for Bordeaux, a "custom" exempting from customs duties the export of these wines.

As a point of interest, it is said that the paving of the harbour is in english stone carried on boats that came for the wine. Indeed, they can not came from England empty, they must to ballast the ships so they can sail the Atlantic.

THE FOYEN AREA AT THE GATES OF PERIGORD

Sainte-Foy-La-Grande is the oldest bastides of Gironde and located in the heart of the Foyen Area. It was founded in 1255 on the banks of the Dordogne river by Alphonse de Poitiers, Count of Toulouse in paréage with Abbaye Sainte- Conques.

Also named "Porte du Périgord", the Foyen Area is at the heart of the AOC vineyard of Sainte-Foy-Bordeaux. Sainte-Foy-La-Grande is one of the smallest villages in France: it goes over 51 hectares almost entirely urbanized ; and is located at the eastern end of the Gironde, one hour from Bordeaux, at the confluence of the departments of the Dordogne and Lot-et-Garonne. 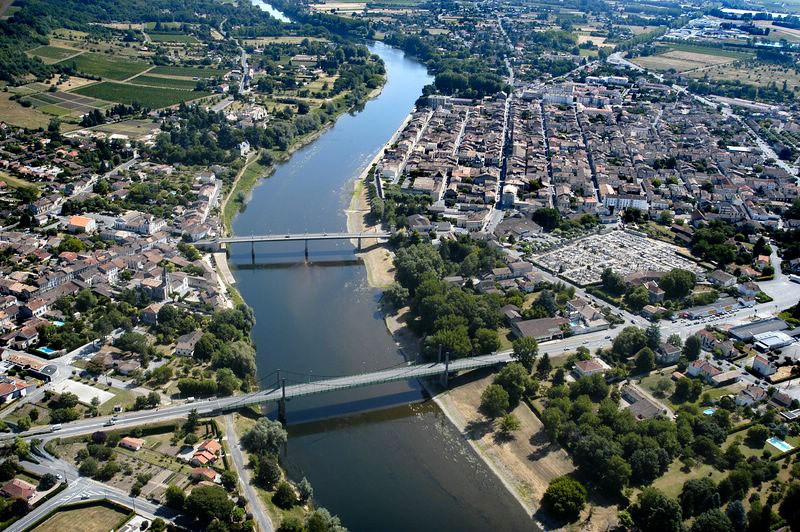 From the Middle Ages, Sainte-Foy-La-Grande benefits from prosperity thanks to the wine trade, whose scene is the harbour well away from the city, as well as activities linked to the main local production : coopers and shipwrights of the navy who installed their workshops along the river.

Under English superiority until 1450, the wines of the sector were dispatched on barges to Libourne and Blaye to be embarked on the high sea ships going to the British Islands.

The true wine-making rise of Castillon-la-Bataille begins in the Middle Ages, especially with the marriage of Eleanor of Aquitaine and Henri Plantagenêt. The town becomes a real harbour stage and an important fortification is built on the banks of the Dordogne, which allowed the export of its wines to England as well as to Holland.

According to Bernard Ginestet : "In the 13th century, these wines were highly valued and were loaded by whole freights to England. They were also distributed locally at retail and constituted the wealth consumption of the Bordeaux aristocracy”.

Due to royal marriages, Aquitaine became a rich English province, attracting the covetousness of the French Kings, which contributed to the beginning of a long conflict : the Hundred Years’ War.

In 1453, the last battle of this war on the hills of Castillon, put an end to the English domination after 300 years of reign. It marks the death of the famous General Talbot and the reconquest of Aquitaine by Charles VII.

In this way, Castillon remains the symbol of the end of the English presence in Aquitaine. 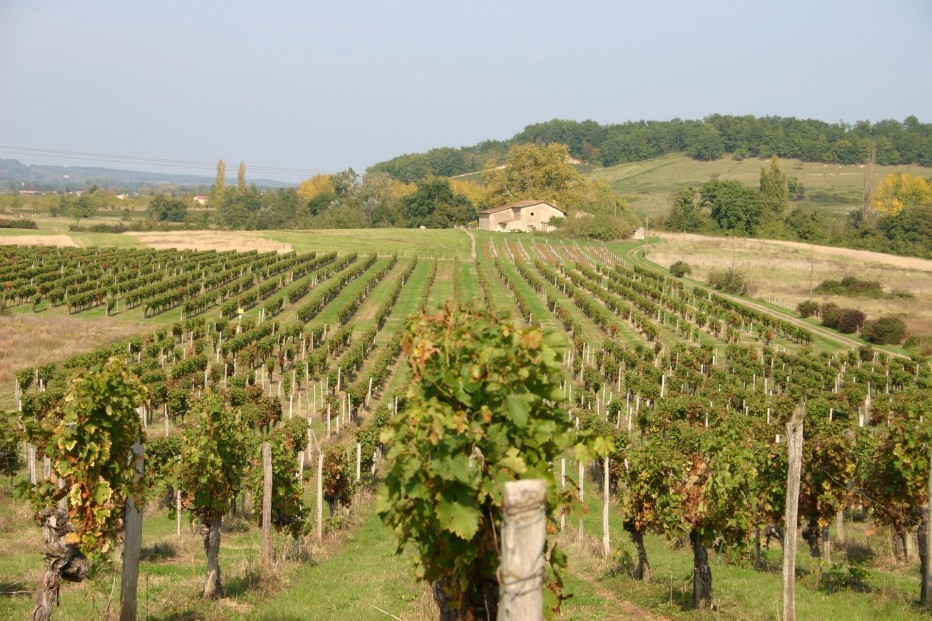 Before the creation of Appellations d'Origine Contrôlée (AOC) in 1935, the wines produced in this region of Libournais were for a long time commercialised under the name "Près Saint Émilionnais". Today, the appellation of this region is "Castillon - Côtes de Bordeaux".

At a crossroads of fluvial and land routes, the Fronsadais, and especially the Tertre de Fronsac, has always occupied a strategic position : the Gallics had an important market there, the Romans have built an altar there, and in the year 770 , Charlemagne built a powerful fortress there.

Later, during the three centuries of British occupation, the wines of Fronsac were largely exported to England. In 1663, the Duke of Richelieu decided to acquire the lands of the Duchy of Fronsac, and there built an "extravagance", the scene of the courtship parties whose the echo spread to the court of Louis XIV. Since then, the notoriety of the wines of Fronsac will not cease to spread. 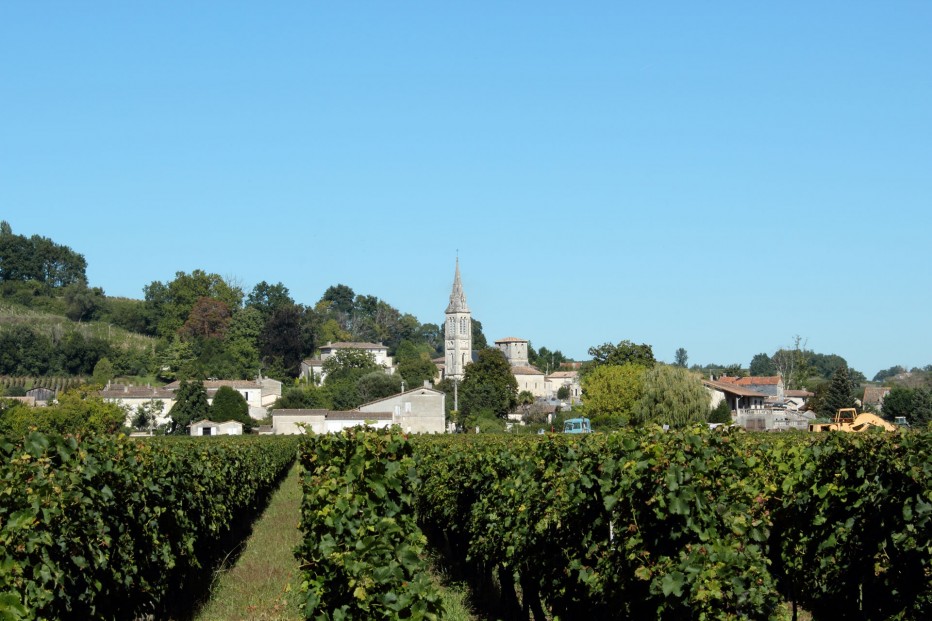 In the 18th century, the qualitative revolution of the Libournais wines takes place here and the rise of the world maritime trade will contribute greatly to establishing the vineyard of Fronsac among the most nobles of Bordeaux vineyard.

In the 18th century, the wines of Fronsac and Canon Fronsac get the highest reputation among the Libournais wines, Saint-Émilion and Pomerol, honoring themselves with the highest prices. Likewise, in 1750, they are three public figures of Fronsac and Canon Fronsac, Mr. Lafon, Mr. Boyer and Mr. Mathieu, who are the first to initiate a wine-making revolution, transforming the vineyard before made up of small “farms buildings” into small “vintages” ( ancestor of the Chateaux of today ").

VAYRES, AN OTHER EYE ON THE DORDOGNE

Vayres is an old city inhabited since the antiquity, located on the Roman road connecting Bordeaux to Périgueux. It was at the same time harbour, camp and market. Its activity was developed thanks to its geographical situation : a rocky peak that overhangs the confluence of the Dordogne and Gestas, on which was built the castle of Vayres.

From the middle of the 19th century, the red and white wines of the Graves-de-Vayres appellation were renowned, as Cocks and Féret mentioned in their book "Bordeaux and its wines" : " Without claiming to compete with the Médoc or Saint-Émilion, the red wines of Graves-de-Vayres are nevertheless full of delicacy. The first vintages are highly sought after for their body and their finesse and can be ranked among the best wines of Libournais, immediately after the second vintages of Pomerol. " 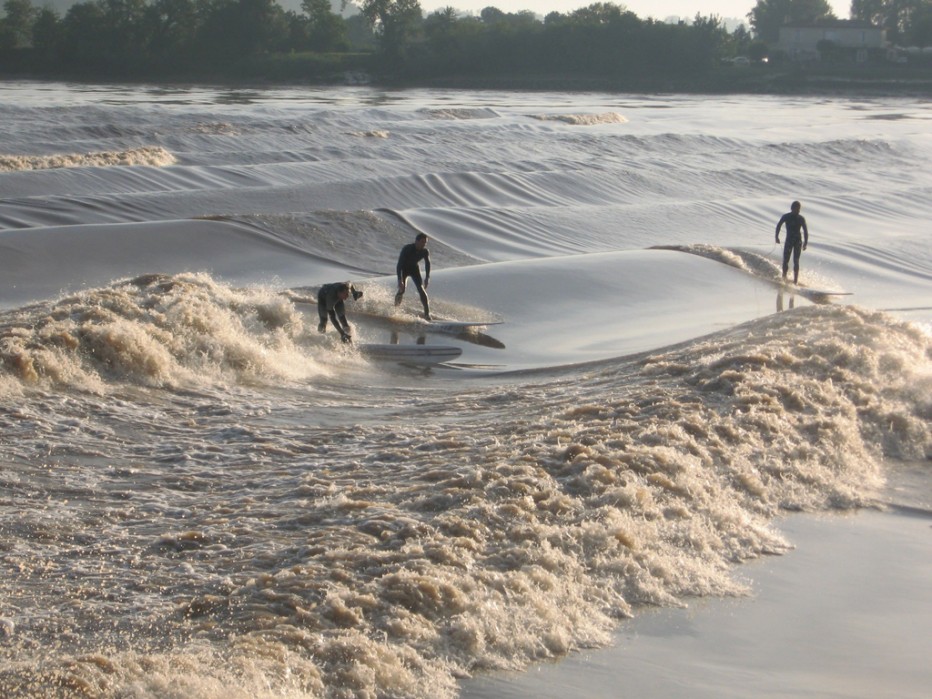 In Saint-Pardon, the harbour of Vayres, the tidal bore, a phenomenon of sudden elevation of the water of a river, here the Dordogne, "passes" twice a day, when the tide passes from descending to rising , during the full and new moons. It is like a long wave up the river. By large tidal bore, surfing can be practiced for at least twenty minutes continuously.

BRANNAIS, THE GATEWAY OF ENTRE-DEUX-MERS

The territory of the Brannais extends from the banks of the Dordogne to the plateaux of Entre-deux-Mers, in the south of Saint-Émilion, between the bastides of Libourne and Sainte-Foy-La-Grande.

The diversity of its landscapes interspersed with hills, small valleys, natural woods and large vineyards are the wealth of this region.

The viticulture is here, as in the whole Great Libourne, very old.

The French Revolution, by restoring freedom of culture, by dividing the goods of the Church and exiled nobles, by assembling land ownership with the right to exploit, has also deeply disrupted the viti-viniculture landscape. The Brannais mainly cultivates the Bordeaux & Bordeaux Supérieur appellations, as well as the AOC Entre-Deux-Mers.

The Brannais is also rich of past’s testimonies. From Prehistory to the XIXth century, discover the vestiges of Gallo-Roman villas ; the abundant Romanesque churches that survived to the Hundred Years War, saved thanks to restorations made over the centuries ; dovecotes, fortified mills, proofs of the diversity of heritage ; as well as the numerous castles dating from the 14th to the 18th centuries and English Guyenne, real testimonies of the strategic importance of the region during the differents wars. 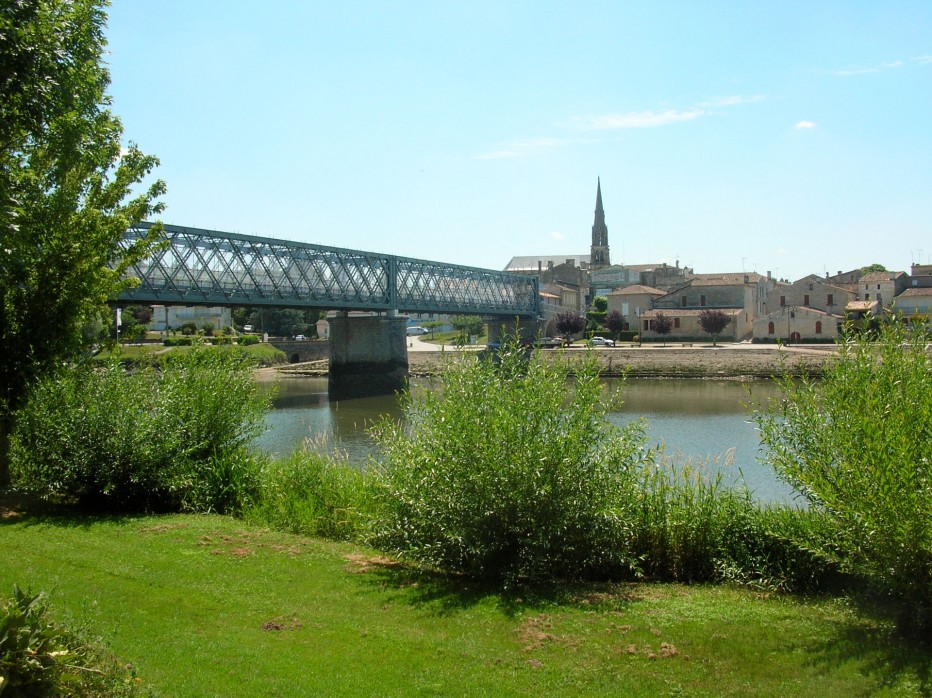